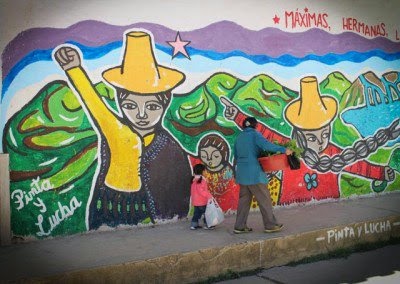 From 23rd to 25th October social leaders, men and women, rural and urban ronderos*, environmental defense fronts, representatives of indigenous communities, peasant organizations, activists and authorities from across the country gathered together in Celendin to analyze the impacts of extractive capitalism and climate change in our territories and to strengthen our resistance and proposals in the face of these threats.
We consider that climate change is the most visible demonstration of the violence and damage generated by the extractive, patriarchal, capitalist model that has assaulted Mother Earth, violating in a systematic way our individual and collective rights, generating social inequalities and enormous discriminations, jeopardizing the future of humanity and aggravating the risks to our health. Therefore, the only viable answer to climate change is to change the core of this system.
In Peru, betraying its promises, the government of Ollanta Humala is deepening its policies of robbing our territories, promoting exploitation of our common goods and natural resources without limits, and deepening the criminalization of the protest and repression. The latest reforms proposed in Minister Castilla’s anti-environmental mega-package dismantle the little environmental regulation and territorial protection that had managed to advance in the country.
In the face of this, we set forth:
The urgent need to strengthen and encourage ´buen vivir´ for our communities in Peru, by means of strengthening sustainable production, local economies, and associations as alternatives to extractivism, in addition to the care of common goods, in order to face up to climate change and to forge a truly fair and democratic society. For this it is necessary to continue defending Mother Earth, our territories and our right to health so that we, the communities, be the ones that decide our destiny, and so that we can recover the harmony between the economy, society and nature. For this, we stand firm in our definite rejection of the extractive and hydroelectric projects that expand in a chaotic and violent manner in our territories.
It is essential to reform our political system and laws which currently back this economic model. One of the hardest and most difficult manifestations of this model is the criminalization of the protest and the repression by the state-owned forces put at the service of the companies, which has cost the lives of dozens of people and has permitted the judicial harassment of hundreds of social leaders and the imprisoning of many of them, as has occurred with our Awajun and Wampis brothers who defended the Amazon and the communities who defend our water. It is time to recover our democracy, so that our rights as communities and citizens are respected.
Even though we recognize the advances of our struggles, in terms of proposals, collective decisions and, in territories like Cajamarca, forging legitimate political representation, we also recognize that there is still much to do to strengthen our organizations at a local, regional and national level. For this we believe it is important to advance in strategies of articulation between our struggles, so that our local resistances and the self-determination of our territories, may join forces to transform the country.
OUR AGREEMENTS
For this we agree:
OUR DEMANDS of the STATE: